Anne lives in Bruges at the time of the Renaissance, Hanna in turn-of-the-century imperial Vienna, Anny Lee in present-day Los Angeles. Three lives, three remarkable adventures, three women with extraordinary parallels, united by the sense of their own difference and by their desire to escape the image which the mirror of their day holds up to them. Everything puts them at odds with what their century, their environment and men have decided for them. Flemish Anne has mystic visions that lead her to the convent. Hanna is one of Sigmund Freud’s first patients and breaks with all the family and moral codes of her time. Anny, whose gifts portend a brilliant acting career, refuses to be cast in the Hollywood mould. All of them are insubordinate and rebellious, but which will fight her way to find truth and freedom?

In this gloriously cinematographic novel, Eric-Emmanuel Schmitt has constructed a Russian-doll-type narrative that deals with three interlocking lives.

What truths lie hidden behind appearances? Should we make do with dreams when harsh reality places obstacles on our path? How to escape one’s condition and origins? Can art become the dominant instrument that will determine a life? These are some of the questions which Eric-Emmanuel Schmitt asks in his wide-ranging novels where pride of place is often given to the female condition. His latest novel applies a Russian-doll technique and is no exception to the rule. The Woman in the Looking Glass recalls the universe of his short stories in Odette Toulemonde and Other Stories for its portrayal of three reluctant heroines from three different eras. Anne lives in Renaissance Bruges, Hanna von Waldberg tries to live for herself in Imperial Vienna, a city discovering psychoanalysis under the influence of Sigmund Freud. Anny Lee is a Hollywood actor who spends her days battling tooth and nail to assert her right to difference.

These three courageous women refuse to accept a life restricted to a reflection in the mirror and reject the machismo, intolerance and fanaticism that shackle the feminine will. They pay dearly for their rebellion, and Eric-Emmanuel Schmitt offers a splendid epilogue that provides the link between the three protagonists. Wearing his novelist’s hat, he pens a wonderfully cinematographic piece of fiction with sumptuous backdrops and wide-angle views, lingering on a face and using flashbacks as a means to familiarize readers with the landscapes traversed and above all to set the stage for his heroines, in a sweeping gesture of empathy and compassion. Combining different story-telling techniques, with here a burning at the stake, there a scene of marauding wolves, Eric-Emmanuel Schmitt depicts Hanna’s life through the letters she writes to Gretchen, supposedly her cousin. The resulting book is a tour de force of novelistic truth and lies that is both elegant and uncompromising.

Heroines of past and present struggle to live as they intend

Is Éric-Emmanuel Schmitt a feminist? It’s tempting to think so from his latest book, which traces the overlapping lives of three women, from the Renaissance through the early nineteen hundreds to our own time, all bent on asserting their independence. But the truth is that Schmitt’s narrative talents, amply illustrated in The Woman in the Looking Glass, put him beyond such inevitably reductive categorization. This cornucopia of a novel combines elements of a philosophical and psychological tale, a historical novel, and a fable for our times. Its overarching unity derives from the arresting modernity of all three heroines.

On the face of it, you might wonder what Anne, a girl from Renaissance Bruges, Hanna, married into the glittering aristocracy of early-twentieth-century Vienna, and Anny, a contemporary Hollywood film star, could possibly have in common. To find out, prepare to be transported on a journey through time and human nature. Readers may feel disoriented and storm-tossed between such different worlds in the opening chapters, but they will soon find their sea legs on what quickly proves to be a compelling and suspenseful voyage.

From book to book, with grace and gravity, Eric-Emmanuel Schmitt seeks to capture the elusive faces of womankind. Indeed, the storm-tossed lives of his female characters are turning out to be far more fascinating than his earlier male heroes. With his penchant for complex and playful structures, Schmitt excels at forging lavish books that teach and entertain in equal measure, and he achieves with aplomb sagas that mingle the grand with the humble, archetypal lives with the ordinary and everyday. In his latest novel, three women who share the same name, Anne, Hanna and Anny, but who live in different eras and places, Renaissance Bruges, early-twentieth-century Vienna and modern-day Hollywood, tread apparently separate paths but bring together the myriad aspects of the beguiling image of the eternal feminine. The saint and witch, the society woman converted to psychoanalysis and the rackety star: three rebellious heroines who are magically united by the broad-minded and admiring lens through which the writer clearly regards the second sex. In a world of misogyny, his attitude is laudatory.

Direct Matin - « Woman, according to Schmitt »

Eric-Emmanuel Schmitt’s latest book is a powerful indictment against appearances and submission written with boundless compassion for his tragic heroines.
The Woman in the Looking Glass is a book full of poetry and astonishing insights into women’s passions and pains. The author of Oscar and the Lady in Pink has once more confirmed his status as an admirer and defender of the female sex.

A gifted story-teller with a talent for depicting his protagonists’ lives with inimitable panache, Eric-Emmanuel Schmitt continues to hoe his unique row in the world of fiction with assurance and ease. There’s nothing stylistically revolutionary about his latest book, The Woman in the Looking Glass. Schmitt, the playwright and novelist has borrowed his technique from Michael Cunningham’s The Hours to tell the lives of three women from different eras but who share the same fate. His treatment of the subject is a vibrant ode to freedom and transgression: woman is man’s future, even if she can’t quite break her chains. 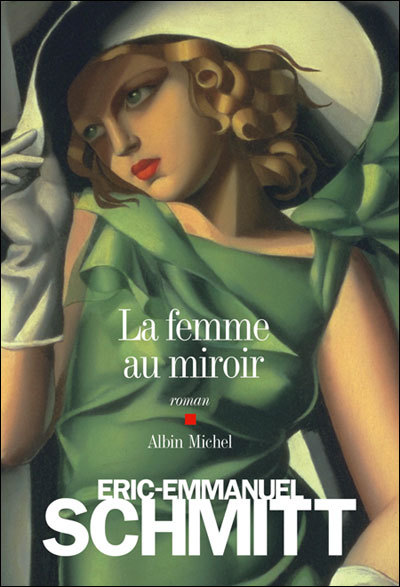