Every night, Simon has a recurring dream to which a mysterious woman will give him the key: he dreams that he is the reincarnation of Milarepa's uncle, the famous eleventh-century Tibetan hermit who bore his nephew an implacable hatred. In order to escape from these endless cycles of reincarnation, Simon must tell the story of both Milarepa and his uncle, identifying himself with them to the point where his identity merges with theirs. But where do dreams begin and reality end? In this play, which is both soliloquy and fairy-tale in the spirit of Tibetan Buddhism, Eric-Emmanuel Schmitt reflects on one of his favourite philosophical themes: does reality exist beyond what we perceive?

In 1993, informed by a friend of mine, I went to see an actor who was playing all alone in a small theatre. His monologue was drawn from the kabala : the legend of the Golem. Let's put it straight : I was thrilled. On that very stage, there he was, the brother I had never had. He seemed to me so familiar ; he was as much an actor as a story-teller. He succeeded in throwing his audience back into some attentive chilhood, filled with wonder. I was so moved that I rushed to his dressing-room where, for once, I was able to find the very words to congratulate him. A serene friendship was born between Bruno Abraham Kremer and I.

Interested in all sorts of spiritualities, he had travelled several times to Tibet. Moments which had been most crucial to him. As far as I was concerned, I had very often found myself, out of love and friendship, sitting at the bedside of seriously ill people and I had regularly drawn my strenght from Buddhist wisdom.
So, very naturally, we decided we would dedicate a play to the historical figure of Milarepa.

In the 11th century, Milarepa's destiny was quite amazing : from a highwayman, he became a saint. He spent all his youth taking revenge : he stole, he set fire everywhere...he spent the rest of his life walking towards peace and doing good. The Great spiritual figures are always like acrobats specialized in the splits. They wander from one extreme of the human abilities to the other. Their incredible journeys fill us for these travellers always reach the highest peaks, whereas we, billions of ordinary men and women, are constantly being driven from Good to Evil, from happiness to grief, from peace to anxiety without ever coming to rest, without ever purging ourselves, without ever committing ourselves totally. Milarepa was as pure as an achievment.

I wrote a monologue. It is a theatrical process I like, although it was much ignored in the past and is overused today. For it is a play and not a narrative. Indeed, a monologue is only a conscience which reveals itself on the stage. But it also enables the actor to play on so many different scales : other characters appear, the monologue can become dialogues, new scenes are organized, there are abrupt changes of tone and of tempo. In Milarepa, I tried hard, in a Buddhist way, to have many different 'I', one after the other, up to confusion, for Simon, the narrator, a man of today, has to complete the cycle of his former lives by telling them to the audience. And so, the monologue naturally and for philosophy's sake become a duologue, a triologue and even more... A bewitching experience for the actor and even more for the spectator.

Along with our friendship, my collaboration with Bruno Abraham kremer did not stop with Milarepa. I wrote for him an another monologue Monsieur Ibrahim ou les fleurs du Coran (the flowers of the koran), a journey through the Sufist spirituality because in the end, in every religion, the mystics are always the ones we feel very close to.

Le Monde - « A monologue spoken by a contemporary character ... »

A monologue spoken by a contemporary character brings us the air of Tibet's twenty-thousand-foot peaks. Eric-Emmanuel Schmitt has appropriated this story with exquisite simplicity and faith, and with a radiance that gives his writing wonderful sincerity, superb dynamism and verve.

Eric-Emmanuel Schmitt's Milarepa is a simple play about a great Buddhist sage that reads with surprising ease on stage. Schmitt retranscribes Shakiamouni's thoughts, inviting us to put our rational minds to work. At the same time, he shows us that the essence of life is the same the world over and that it consists in generosity and self-knowledge.

Radio-France - « An attractive church cloister is the setting for ... »

An attractive church cloister is the setting for a monologue that leads us to the summits of the Himalayas but also to the heights of human thought to reflect on Good and Evil, how to exist in the world and how to find one's way there. With astonishing humility, Eric-Emmanuel Schmitt proves that he is a superb writer. The tale is an unpretentious one, inspired by true stories and legends. Not least, he has done Bruno-Abraham Kremer a great favour in writing this monologue for him, and that is a most beautiful thing. 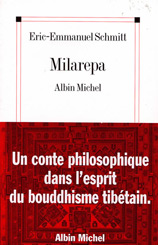