Seven-year-old Joseph is obliged to go into hiding. He learns not to talk about his background or his feelings or even mention his name. In the relative safety of a Catholic boarding school, he grows up in the care of Father Pons, a simple man who makes it his business to keep Jewish culture alive and pass it on to these rescued children so that they might never lose their identity. In the crypt beneath his church, Father Pons has reconstructed a secret synagogue where he studies the Torah, the Kabbala and rabbinic texts in the watches of the night. Here, too, he houses his collection of religious objects…

Le Soir - « A tale about a dark moment in history »

A tale about a dark moment in history - the Holocaust - from which Schmitt has conjured a radiant tale that is sure to be in everyone's hands in no time. He describes a past that is happily unknown to anyone under twenty but he presents it as a moment of truth that gave the 'Just' the chance to come forward. The setting is Belgium where certain Jewish children escaped the death camps through the efforts of people who were brave enough to protect them. Seven-year-old Joseph is rescued by Father Pons, a priest from Namur, who not only saves him from the worst but instructs him in the Jewish religion.

Father Pons describes himself as a 'collector', and like Noah, he wants to save peoples, any peoples, who are threatened with extinction by the ravages of History. Written in a language that is by turns emotional and humorous, where every word counts and is loaded with meaning, the book is quite clearly the work of an author with something to say and a conviction to share though there's not an ounce of proselytism.

A little book by a great humanist.

Eric-Emmanuel Schmitt's new novel is just out. Noah's Child cannot fail to delight the thousands of readers who took Oscar and the Pink Lady to their hearts.

The first impression this writer makes is one of amazement at the unbelievable number of records he has clocked up; he is the most widely read contemporary French writer and the most frequently staged in the world. He piles up records the way Carl Lewis stockpiles gold medals. Oscar has sold nearly 450,000 copies on the French market alone and is still at the top of the charts a year after it appeared. Mr Ibrahim and the Flowers of the Koran has sold over 500,000 copies in Germany alone and has recently won the prestigious 'Bucher Preis' [...]

Noah's Child is a novel that needs no apology, nor does it need Schmitt to list his professional achievements. 'The story is Schmitt all over,' enthused its literary director. 'But it's all true,' the author adds. The novel is set in Belgium. War has broken out. A Jewish couple send their son, Joseph, into hiding as his only hope of avoiding the raids. The boy is hidden in a Catholic boarding school along with other Jewish children. Father Pons, an eccentric Catholic priest, not only seeks to save these Jews but has gone so far as to reconstruct a secret synagogue in the crypt of his church. Here he studies the Jewish sacred texts so that the children can preserve their identity. Joseph is curious about his identity and the Jewish religion. As though looking in a mirror, priest and child question each other about their respective identities. Joseph finally comes to accept his history and he grows up to preach respect for other people, including in the modern land of Israel where intolerance is a constant threat. 'All history is contemporary and is told in the past tense. I want to show the current need to respect difference.' The novel is based on the true story of Abott André, curate of Namur, who built a similar synagogue and was honoured with the title of 'Just'.

It marks the end of the cycle of novels about the great religions. An out-worn theme? 'On the contrary, it's highly topical. I was born in 1960 and when I was at University (Schmitt studied Philosophy), we were told that God was dead and the religions on their last legs. Intellectuals were no longer concerned with the subject. But God survived, at least as a question, and the religions today are strong to the point of violence. One of the duties of contemporary man is to understand these religions better, because they make us what we are. With a better understanding, the difference between peoples becomes less marked. No religion is the true religion, but they are all respectable. I am interested in the invisible architecture that is hidden in man. Isn't what is essential invisible?'

Pardoxically, it is this new approach to the question of meaning (including the meaning of tragedy with the death of Oscar or the horrors of Nazism) in simple, powerful texts that has brought Schmitt his success. His books are like fables that people can make their own. His aim in taking on such themes and particularly the theme of religion, is to combat all the '-isms, all the radicals. To know people better is to combat terrorism. Terrorists aren't interested in other people; they refuse to get to know them, in the words of the philosopher Levinas who discusses respect for other people, an element that's central to Judaism. And respect is more essential to our make-up than the far more problematic concept of love'.

Joseph questions the idea of heritage. 'It's more interesting to share questions than answers. Answers imply closure, so the question of identity is more interesting than the solution of identity.' As in Oscar, the hero is a child, 'because childhood is the age of wonder, which is the first step to becoming a philosopher. Children are marvellous vectors who can explode all the prejudices we have accreted. They are like little scalpels.' Stylistically, Schmitt adopts a straightforward language: 'it took me ages to come to. As a writer, one's initial tendency is to increase the number of signs. Being able to limit yourself to only what needs to be written and discard affectations is a mark of maturity. It's no small task.'

A French novelist and playwright among the most read and acted outside France, Schmitt has increased his 'Mystic Cycle' ('Cycle de l'invisible') to four with the addition of this transparent and moving novella that goes right to the heart of things. 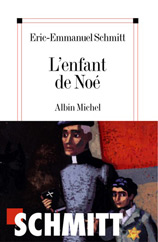